Spring is a season of renewal and restoration. So, it is fitting that St. Michael’s Indian 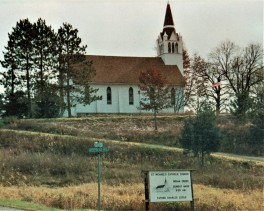 Creek Catholic Church, a few miles south of Oakdale, Wisconsin is receiving a complete interior renovation. Each day a dozen parishioners and Tomah Knights of Columbus members are laboring to revive its original look. On Monday, April 12, we removed the pews that were carted off for the Amish to be refurbished. The old wall paneling came down on Tuesday. Wednesday, the false ceiling was taken out. Parish ladies, Juanita Arttus, Marge Shie, and Therese Schuh serve a lunch at noon.

The parish was established in 1860 by immigrant German farmers that had a deep and abiding faith. The Church, as it looks today, was built in 1910. One of the smaller parishes of the Diocese of La Crosse, St. Michael’s sits alone on a hill on the eastern edge of Monroe County, bordering Highway N which parallels Indian Creek, a brook starting in the hills along Highway A, and joining the Lemonweir River at New Lisbon.

St. Michael’s is not unlike numerous Catholic and Lutheran churches that dot the Driftless Area countryside, their cross-topped steeples reaching for the Heavens.