Walking Home from School to the Scheckel Farm-Part 2 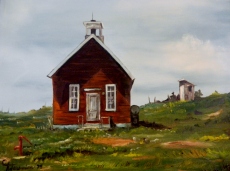 of Crawford County, was the Ingham farm. Two bachelors and an “old maid” lived there. The Ingham’s were of English stock and they have their own coat of arms. A Thomas Ingham arrived in New England in 1657, well over 100 years before our country was a country. An Ingham served as Secretary of the Treasury under President Andrew Jackson.

James Ingham was born in Lancashire, England and settled in the Seneca area with wife, Nancy Andres, in 1856. Their Ingham children married Bernier’s, Lawler’s and Crowley’s.

The Ingham’s were warm and friendly folks; Tom and Bob Ingham and their sister Margaret. Margaret was the postmistress at Lynxville.  We never knew why most of them never married. Another brother, Jack Ingham, had a farm further back on Oak Grove Ridge. Jack also never married. One doesn’t think of those things when you’re young. They all lived in a large rambling farmhouse. The Ingham farm was on a knoll with a commanding view in every direction.

The garage and machine shed were on the right and the same side of the road as the house.  But the barn, hog house and assorted other building were across the road.  Frequently, Bob or Tom, or both would be out by the road.  The conversation might go something like this.

Bob Ingham: “How was school today?”

Most conversations were more extensive, I believe, and might concern the upcoming Basket social in late October, or the Christmas program, or end-of-the-year May picnic. The Ingham attended them all, even though they had no kids in school.

Tom Ingham died in 1963 at age 49.  It was said that he was lifting a bucket of milk into the cream separator when he keeled over with a heart attack. I was to be one of the pallbearers.

Bob Ingham lived until 1968, passing away at age 59.  Margaret and Jack both died in 1982, Jack at age 77 and Margaret at age 79.  I see their graves each time I visit St. Patrick’s cemetery in Seneca, along with a bunch of Ingham’s that go back to the Civil War.  I walk beside those graves in Seneca with fond memories of hard working, friendly, helpful, humble, and loving people.