Snowball Fights and Forts at the One-Room Country School

Posted on February 3, 2018 by larryscheckel

Snowballs flew in the late 1940s and 1950s at the Oak Grove Ridge one-room country school outside of Seneca in the middle of Crawford County. The best snowball fights 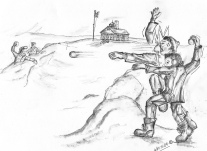 happened when 2 impromptu teams built snow forts about 30 feet apart by rolling big balls of snow, much like starting to make a snowman and positioning them into a line, packing snow between the orbs, leveling the top, and building a wall up to about 3 feet tall and 15 feet long.

Hunkered down behind the protective wall, each combatant packed together a dozen or so snowballs for ammunition. Then the snowball fight commenced and what great fun it was! Raise up, throw hard at the opponent and duck down before getting hit.

My brother Bob came up with an ingenious way of fighting. Poke a small hole in the wall, enough to peer through but not so big that a snowball can penetrate. With snowball in hand, crouched down but ready to throw, sight through the hole, and watch until the enemy is sighted just raising up, then let go.

Many was the time the foe would be hit by a snowball without ever seeing it coming. These battles would rage back and forth sometimes lasting the whole noon hour. At times the war was cut short by some crybaby kid that got hit in the face with a snowball and went bawling into the schoolhouse to tell Teacher. Teacher would come out and put a stop to our good fun.