Genesis 3:19 “by sweat of thy brow, thou shalt eat thy bread” 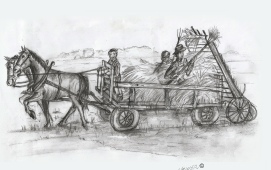 n the 1940s and 1950s started in early June and just seemed to last all summer and going into early September. In between first crop and second crop, we cut and shocked oats. After second crop, threshing was done. After threshing, we often put up a third crop of hay.

The Scheckels put up hay loose, as the expression goes. No baler on the Scheckel farm. Cut the hay down, let it cure for a few days, and bring in the side-rake to windrow the hay, then the hay loader and wagon moved in. It was hard, dirty, back breaking work, in often hot and or humid weather. Today, only the Amish put up hay this old-fashioned way. As kids we simply didn’t know any better. We went with the flow.

Dad had a No. 9 McCormick-Deering Enclosed Steel Gear Mower. The No. 9 was advertised to “take less power to pull and last a lifetime”. The sickle ran faster than the older type mowers. These mowers were made from 1939 to 1951. They had a 5-foot sickle bar.

Farm machinery is very utilitarian, especially early farm machinery. There are no frills and everything and every part has a purpose. At the end of sickle bar was a board, set at an angle, with a stick attached. The angled board and attached stick had the sole purpose of throwing the end hay back onto the swath. This technique created a distinct separation between the standing uncut hay and the newly mowed hay.

This method prevented the sickle bar from getting clogged with the hay cut in the previous round. Also, this distinct separation helped when raking the hay into windows.

Timing was everything in haying season. Ideally, cut the hay close to full maturity, the clover, alfalfa, timothy, and grass. Having clear, cloudless, sunny, dry days, with a breeze, provided the best conditions for drying and curing of hay. Curing would take two or three days. Then the side rake comes through and puts the hay into windrows, followed by the hay loader and wagon.