The long, hot, lazy days of summer, middle of July, bring back fond memories of life on the Scheckel 238-acre farm, two miles northwest of Seneca in the heart of Crawford County.

Haying season started in early June and just seemed to last all summer. In between the first and second crop, we cut and shocked oats. After the second crop, threshing was done. Following threshing, we often put up a third crop of hay. 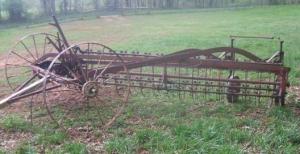 The Scheckel family “put up hay loose”, as the expression goes. No baler on the Scheckel farm. We would cut the hay down, let it cure for a few days, and bring in the side-rake to windrow the hay.  Then the hay loader and wagon were moved in, both pulled by horses. It was hard, dirty, back breaking work, in often hot and or humid weather. Today, only the Amish put up hay this old-fashioned way.

Dad had a No. 9 McCormick-Deering Enclosed Steel Gear Mower. The No. 9 was advertised to “take less power to pull and last a lifetime”. The sickle on the No. 9 ran faster than the older type mowers. These No. 9 mowers were made from 1939 to 1951. They had a 5 foot sickle bar.

Closed gears were a big improvement in the McD No. 9 mower design, or so says the company. The gears ran continually in oil so as to endure less wear and damage to gears and bearings. The mower had a sickle bar that bore serrated triangular knives that moved back and forth horizontally. Guard teeth in front of the blades helped hold stalks upright and protected the sickle bar teeth.

If you drive past old farmsteads in the Midwest, you may see a lot of these steel-wheeled horse drawn mowers. Many sit in a patch of weeds, but you may also see them in Amish farms.

Timing was everything during the haying season. Ideally, the hay, made of clover, alfalfa, timothy, and grass, was cut close to full maturity.

The best conditions for drying and curing hay are clear, cloudless, sunny, dry days, with a breeze. Curing would take two or three days. Humid weather or rain was not good for getting the fullest nutrient levels.  In those conditions the stalks become woody and leaves are lost.

Then the side rake would come through and put the hay into windrows, followed by the hay loader and wagon.

The curing hay has a wonderful smell. If you could bottle it, you could make a mint, call it “Essence of Alfalfa”.

The Scheckel kept the hay fields relatively weed free. We had to pull yellow rocket and white weed. That yellow rocket might be the same as yellow mustard. We used both names.