In our last blog we were passing the Sobeck farm, which was known as the County Poor Farm went I was growing up on the Scheckel farm out on Oak Grove Ridge in the 1940s and 1950s.

Now we’re passing the Severson farm and that is where that accident happened. I was 15 years old and it made a huge impression on me. Four people killed in the early evening of Oct 16, 1957. Two of those were my sophomore classmates at Seneca High School; Mike Sprosty and Bernard Foley. I was playing catch alongside Seneca High School with Mike Sprosty at noontime on that fateful day.

There was no football at Seneca High School in 1957. There were 5 Kickapoo Valley Conference baseball games in the Fall and 5 in the Spring. Winter was basketball. All the conference teams were in the Kickapoo Valley, except Seneca, Wauzeka, and De Soto. We played Gays Mills, Soldiers Grove, Readstown, Viola, La Farge, and West Lima.

There was a nighttime initiation program in the Seneca High School gym starting at 7 PM. The Scheckel boys had the chores and milking done at the usual time, about 6:30 PM. So we “cleaned up” and went up to the Seneca High school gym.

The audience was waiting. Seems we were getting started. Mr. Webster comes up on the stage and announces that “there has been a very bad car accident about an hour ago”. Rumors run through the crowd as we headed for our car. It was the deadliest automobile accident in Crawford County history.

At about 5:00 PM  Albert C. (Bert) Swatek pulled into McCullick’s Phillip’s 66 Gas Station in Seneca. Bert Swatek, age 22, worked at the Janesville auto plant.  McCullick’s was the teen hang out at the time.          Bert Swatek told a group of boys “hop in, I’ll take you to Initiation”.  Frank Pintz jumps in the back seat. Mike Sprosty and Bernard Foley climb into the front seat. Bert Swatek starts the car and instead of pulling around the block to Seneca High School, makes a different choice. He heads south out of Seneca on Highway 27. He tells the boys that he needs to go to Eastman to change clothes. 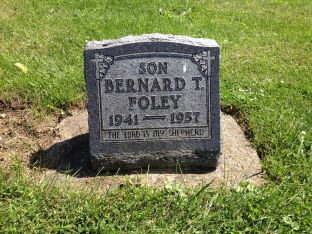 The time is now about 5:45 PM. Bert Swatek is driving very fast. The boys implore him to slow down. They discussed grabbing the car keys. The southbound Swatek car rounded a curve near the Severson farm. The car crossed the centerline and collided head-on with a north bound car driven by Tom Snell. Snell and his 10 year old daughter, Joanne Marie, were going from one of their farms to another.