We’re traveling down through Crawford County from Rising Sun to Prairie du Chien, Wisconsin. For 170 years Highway 27 was an established route between Prairie and Black River Falls. Right now, we’re lingering a bit in Seneca.

Seneca is known as the home of Ben Logan, the author of The Land Remembers. According to local lore, Ben Logan was a bit sour on Seneca. Seems that high school principal Gordon VanTill told Ben that he wasn’t cut out to be a writer. Ben Logan graduated from Seneca High School in 1938.

Our family was introduced to Ben Logan when came to Tomah in 1980 and did a reading at the Monroe County Farm Progress Days that were held just west of the city limits on the Zastoupil and Steinhoff farms. Our boys were 10 and 12 years old and we all walked out to the tent where Logan was speaking. Then we visited the “underground” house that had been built into a side hill. 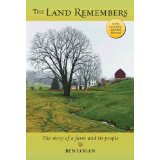 In 2004, the last of school in Tomah in early June, there were no classes for students as they had a special clean-up and activities day. So I had an appointment in La Crosse, then went down the Mississippi River, to Lynxville, and up on the ridge on County Highway E to Seneca. Visited my mother, then Seneca High School, and went out on Taylor Ridge, left on Hall’s Branch Road, right on Zintz Road and stopped at Ben Logan’s Seldom Seen farm.

As luck would have it, he was out west of the house planting garden helped by a neighboring lady. So I had a chance to chat with Ben Logan and I considered it quite an honor.

All those scenes described in his The Land Remembers became real; the house, barn, big maple trees, the white pine tree west of the house that he climbed up into at age 16 after losing his mother the past winter, and the surrounding fields and woods.

In our next blog, we will remain in Seneca and discuss a few of the odd people that lived there.