Posted on January 2, 2016 by larryscheckel

We’re driving south through Crawford County on Highway 27 where I grew up on a farm 2 miles northwest of Seneca. In the mid 1800s, Seneca was an overnight stagecoach stop 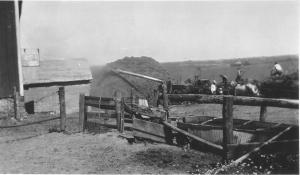 When I was a kid on the farm, the term “going to town” usually meant going to Seneca. Seneca got started in 1857, when land owner Sam Langdon had 10 acres surveyed  and platted. Seneca is named after a Seneca in New York State. Langdon built a hotel and the road thru Seneca became known as the Black River Road.

Seneca was a stage coach stop. It had a blacksmith shop, trading post, drug store, shoemaker, harness shop, and wagon maker. That blacksmith fellow was said to be “the best damn blacksmith in Crawford County, even if he was drunk half the time”.

Going to town was exciting as a kid. There were always people walking about, greeting each other with waves, going in and out of stores.  Tractors, wagons, and machinery moved right down main street. Main Street was actually Highway 27. Seneca had one other street. We called it “the back street”. Back street had a few houses and Ervin Walker’s garage. There was a turn off that went east out of Seneca, called Taylor Ridge. Ben Logan lived out on Taylor Ridge.

Donald Trehey ran the Post Office. James Honzel had a locker plant with a few holding pens in the back. Seneca Stockyards on the edge of town.

There were two grocery stores,  Kane’s IGA Market  and Bob Johnson’s Grocery Store. Dad and Mom shopped at both. Mom would make out a grocery list as the days passed on the farm. Dad would most often pick up the list when he went to town.

We kids always wanted to go to town with Dad. Both stores opened for a few hours on Sunday morning for the “church crowd”. There might be a store visit after taking some pigs or cows to market. Dad banked at Prairie City Bank, run by Clarence Paulson, and right next door to Kane’s IGA.

Kane’s IGA was started by J.H. Finley and W.D. Kane and later son-in-law Harold Trehey. The grocer I remember was Harold Trehey, who stood behind the counter and filled the order that Dad had on his list. Boxes of cereal were on shelves stacked up near the ceiling. Mr. Trehey used a long pole to tip a box of cereal over and catch it in his arms. He put it with the other items on the counter.  The shopper did not go up and down the aisles picking up items. All the groceries were put in brown paper bags. Picture: threshing oats on the Maney farm (later the Scheckel farm) in the late 1930s.

More about Seneca in our next blog.