Continuing Down Into Crawford County

Posted on December 5, 2015 by larryscheckel

We continue our weekly blog of driving down through Crawford County, taking Highway 27, which runs down the spine of the County, from Sparta, to Viroqua, and down to Prairie du Chien. In the mid 1800s, Seneca was an overnight stagecoach stop between Prairie du Chien and Black River Falls.

On our memory trip through Crawford County, we leave the pastoral rural Evergreen Cemetery and head toward Seneca. We pass the Olson farms on the right. And that reminds me of the Olsons. Every few years it seemed, Dad had to call Kimmel Olson to come out to our farm with his truck and rig to “pull the pump”. Dad knew how much water should come out of the spout on each upstroke. If insufficient water came up, there was a leak in the pipe. Or the cylinder in the bottom of the well had problems with the valve seals.  The thin rod, known as the “sucker rod” moved up and down the two inch pipe and tended to rub on the inside of the pipe and wear holes in it. 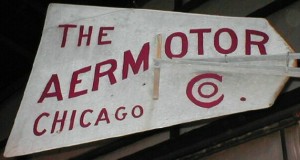 So Olson would come, attach his equipment to the piping, and one pipe section at a time would be pulled up. The two inch diameter pipe and the thin sucker rod that went all the way down to the bottom of the well were inspected and laid out on the grass. A leak or two would be found and a new section of pipe put in its place.

At times the wind might not blow enough to rotate the Aermotor. The water levels in the two cisterns would get very low. To overcome the lack of wind we had an old gasoline engine that could power a pump jack. The pump jack could be hooked up to the sucker rod instead of having the windmill do the work.  With gears turning and parts clanking away, they yielded quite a rhythmic sound.

I loved climbing up the ladder to the highest point on the windmill and looking over the farm stead and countryside.  It seemed a little scary and a bit daring.

The Tilman Olson family lived along Highway 27 between Mt. Sterling and Seneca.  Elmer Olson as a friend of my older brother Ed.  Leonard Olson married Ilene Fradette, Tom Olson married Phyllis Sprosty.  Janet Olson became a teacher in Seneca. Every time I pass the Olson farms, I think of those successful and resourceful Norwegian immigrant families.

In our next blog we will come to the Stony Point one-room country school.