Posted on October 7, 2015 by larryscheckel 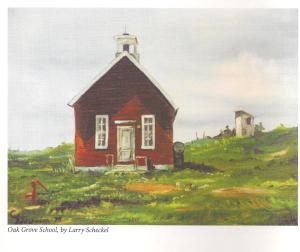 A.D. Carberry was the Superintendent of Schools for Crawford County. He made visits to the 116 rural schools. The following is an excerpt from the book, Seneca Seasons: A Farm Boy Remembers. Find it on Amazon.com. The teacher is Grace Biehl and the year is 1949.

The austere Mr. Carberry had the three of us; Donald Mahan, Mary Lou Rosenbaum, and me, Lawrence Alvin Scheckel, come up to the front seats near the south wall. Mr. Carberry stood, with chalk in hand, next to the smaller blackboard. The grilling was about to begin.

Mr. Carberry wrote a word on the blackboard and asked who knew the word. Mary Lou’s hand shot up.

Carberry writes another word with screeching chalk on the blackboard. Mary Lou’s hand goes up again. Mr. Carberry looked at me, looked at Donald Mahan. Nothing. Carberry pointed to Donald Mahan.

“Candle”, retorted Mahan correctly. Donald Mahan was not about to volunteer for anything. Very shy kid. Another word on the board. Mr. Carberry points to me.

I didn’t know the word or I was too scared to say anything. Carberry chalks a third word.

“Anyone ?” he pleads in slightly begging tone. Mary Lou Rosenbaum’s arm in the air again, bubbling, head tossing from side to side, raising an inch or two out her desk. I’m beginning to develop a healthy distain for this classmate. Nothing from Donald or me. He points directly at me. I didn’t recognize the word. Long pause, then his pointer goes to Mary Lou Rosenbaum.

“Excellent” says Mr. Carberry. And there are more words; store, have, zoo, children, brother and some I can’t remember. I think I got one or two but the vast majority were identified by Mary Lou and Donald. I was trailing badly, third in a group of three.

Next came some arithmetic problems. He wrote 14 and 10 under it and put a plus sign out in front.

“What do these two numbers add up to?” Mr. Carberry asked. Mary Lou’s hand was in the air immediately. No raised hands from Donald and me.

“Anyone besides, now what is your name, again”, from Mr. Carberry.

“My name is Mary Lou, and the answer is 24”, she responded brightly.

“What number comes next”, he grilled.

“Donald, do you know”? asked Carberry.

“What’s your name”? Mr. Carberry, asked looking directly at me.

I was frozen in my seat, either by fear or ignorance or both. But I had no answer.

Of course, Mary Lou Rosenbaum, squirming with eager anticipation, came up with the answer. That bubbly little snot, I thought!

This ignominious session went on for about 10 to 15 minutes. Questions about geography. “Name one country in Europe?” and “What is the capital of Wisconsin?” and civics. “Who is the president of the United States?”

Finally, we were allowed to go outside to join the recess group. Later, I found out that Mr. Carberry had recommended to Teacher Grace Biehl that “Lawrence is going to need a lot of extra help”. I had been labeled, right there on the spot, in the hill country of southwestern Wisconsin, in the heart of Crawford County, as having a “learning disability”. And that information filtered to my parents, but I don’t remember hearing anything about it at home.