The book Seneca Seasons: A Farm Boys Remembers is finally out. It is the memoir of my growing up on the Crawford County farm, 2 miles from Seneca, in the southwest Wisconsin. I was born in 1942 on a rental farm on Wauzeka Ridge. The Scheckel family, Dad, Mom, and six kids moved to the 238 acre farm in the spring of 1945.

The older three siblings, Rosemary, Ed, and Teresa were gone from the family farm when I was about 8 years old. So I grew up with Phillip, a year older than me, and Bob, a year younger than me. Three younger sisters, Catharine, Rita, and Diane, came along later.

Seneca Seasons is mostly about us three Scheckel boys growing up together. Chores, farm work, hunting, fishing, arguing, games we played—it’s all in there and more. The threshing crews of the  mid 1940s, farming with three horses, putting hay up loose, cutting oats with a grain binder, shocking corn and shredding, cutting wood with a crosscut saw, milking cows in sweltering heat and bitter cold, and attending the one-country school out on Oak Grove Ridge.

This book is for anyone who grew up on a farm or wish they had, or who wonder what life was like in the United States in the 1940’s and 1950’s, or speculate about growing up in a large family of 9 children, or likes to eat at Cracker Barrel Old Country Store.

Learn how the one-room country school was a focus of rural life. How family, school, and church stimulate and induce the way we lived later in life. Of friendships formed and lessons learned on the playground.

Find the answers to these questions: Which of the nine Scheckel kids backed up the green 1953 Chevrolet farm pick-up truck and the back axle hung up with the wheels spinning? Which of my sisters run over a brand new 10 gallon can with the truck, claiming that the sun got in her eyes? Who broke his arm falling out of a tree hunting squirrels, put his fingers in the corn sheller, and nearly cut his foot off with an axe? Who urinated on the electric fence- and never did it again? Who put a pig ring in his own nose?

This is a blatant advertisement for Seneca Seasons and it is available on amazon.com. Makes an excellent Christmas gift. My wife, Ann, and I have already had a book signing and will have several more in the next few weeks. At book signings, we sell the book, (40 pictures, 48 sketches, 3 appendices) for only $12. Or an unbelievable deal of 2 for $24. A little joke !! 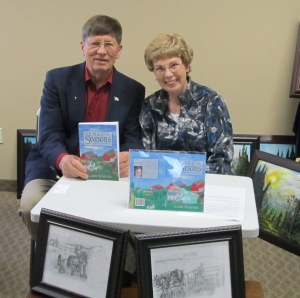