We’re continuing or trip down through Crawford County. Right now, we’re holed up in Seneca. When we were in high school, we have religious instruction for high schoolers every Monday night at St. Patrick’s Church. One early evening in 1958, Jewel Larmore’s wife, Gertude Mary, was hit and killed by one of our classmates. She was crossing the street, walking between their Mobil Station and the area of Johnson’s Store and Sullivan’s Bar when she was struck by a pickup truck. It was nighttime and she was dressed in dark clothing and wasn’t seen by the driver. No blame was assessed, but she was missed by the community. 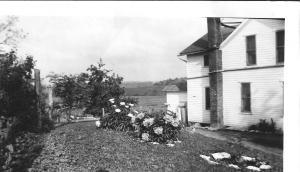 I wondered why Dad bought gas at McCullick’s and Larmore’s. We had plenty of gas on the farm for the tractor. Turns out the gas used on farm was taxed differently than gas both at a filling station. Any farmer might have to prove he bought gas for the car at a commercial gas station. He kept receipts.

We did not have a freezer on the farmer. We had a refrigerator and a small compartment inside was a freezer, but it couldn’t hold much. Mostly for making ice cubes.

Dad and Mom rented 2 big bins at Jim Honzel’s locker plant. It was across from Johnson’s Grocery Store, and had a rounded concrete roof. From behind his counter, Honzel greeted people coming through the door. Patrons picked up the keys to their locker, opened a heavy wooden insulated door, and immediately stepped into sub zero wintertime.

Oh, how we loved visiting the locker plant, scurrying along behind Dad, shivering, picked out the packaged meats, the names of the cuts were ink stamped on the plain brown wrapping paper. Those frozen cuts of meat were harder than concrete.

Honzel’s also did butchering, so when our family became a little more affluent, which means the farm was paid off, we would take a steer or heifer to the locket plant, and several weeks later we got the steer or heifer returned to us a little bit at a time!

Shopping done, Dad would go into Sullivan’s Bar and have a tap beer or two and he would leave us boys in the car to finish our ice cream cone. I think the longest we ever waited is 15 minutes. If it got longer, Dad would come out to the car and have us come in and sit at one of the stools or tables.

Stools were fun because the tops spun around and you could sit there twist back and forth and twirl round and round. That was great fun. Dad would buy us a soft drink in a glass. I think Sully opened one bottle of pop and poured it in 3 beer glasses and served it to Phillip, Bob and me.

Sully’s had one of those Hamm’s beer light shades that shimmered . It had a canoe on a stream with Hamm’s beer bear, “From the Land of Sky Blue Waters”. Sullivan’s tavern had an old black and white television set mounted close to the ceiling, up in the far corner.

Television was quite a novelty. We didn’t have television at home. Periodically, one of the Hamm’s beer commercials would run on TV. In one memorable 30 second commercial, a beaver gnawed a tree, the tree falls over, and the Hamm’s bear jumps aboard the log. The Hamm’s bear is floating down the river on a log, a big Hamm’s logo engraved in the side of the log, the bear doing some fancy log rolling. A goose flies overhead and hands the bear a sign. The bear unfolds the sign and it says “Hamms, the beer refreshing”. A female and male voice sang a ditty, with drums beating.

In our next blog, we’ll linger in Seneca for awhile. Picture of our house on the farm. Our Mother loved flowers.